Scott H. Andrews lives in Virginia with his wife, two cats, twelve guitars, a dozen overflowing bookcases, and hundreds of beer bottles from all over the world. He writes, teaches college chemistry, and is Editor-in-Chief and Publisher of the nine-time Hugo Award finalist and World Fantasy Award-winning online fantasy magazine Beneath Ceaseless Skies.

Scott is a graduate of the Odyssey Writing Workshop; his literary short fiction has won a $1000 prize from the Briar Cliff Review, and his genre short fiction has appeared in Space & Time, Crossed Genres, and Ann VanderMeer's Weird Tales.

Scott has taught writing at the Odyssey Workshop, Writefest, and online for Odyssey Online Classes, Clarion West, and Cat Rambo Academy for Wayward Writers. He has lectured on short fiction, secondary-world fantasy, editing, magazine publishing, audio podcasting, and beer on dozens of convention panels at multiple Worldcons, World Fantasy conventions, and regional conventions in the Northeast and Midwest. He is an eight-time finalist and 2019 winner of the World Fantasy Award, and he celebrates International Stout Day at least once a year.

Neil Clarke is best known as the editor and publisher of the Hugo and World Fantasy Award-winning Clarkesworld Magazine. Launched in October 2006, the online magazine has been a finalist for the Hugo Award for Best Semiprozine four times (winning three times), the World Fantasy Award four times (winning once), and the British Fantasy Award once (winning once). Neil is also a nine-time finalist for the Hugo Award for Best Editor-Short Form, three-time winner of the Chesley Award for Best Art Director, and recipient of the 2019 Solstice Award from SFWA. In the thirteen years since Clarkesworld Magazine launched, numerous stories that he has published have been nominated for or won the Hugo, Nebula, World Fantasy, Sturgeon, Locus, BSFA, Shirley Jackson, WSFA Small Press, and Stoker Awards.

In 2012, Neil suffered a near-fatal heart attack while attending Readercon in Burlington, MA. The damage sustained in this incident later required that he undergo surgery for the implantation of a defibrillator. These events inspired both Upgraded, his 2014 cyborg anthology and his 2017 jump from his day job in academia (technology) to become a full-time editor.

He currently lives in New Jersey with his wife and two sons.

Elizabeth Hand is the bestselling author of fourteen genre-spanning novels and five collections of short fiction and essays. Her work has received multiple Shirley Jackson, World Fantasy and Nebula Awards, among other honors, and several of her books have been New York Times and Washington Post Notable Books. Her recent, critically acclaimed novels featuring Cass Neary, “one of literature’s great noir anti-heroes” [Katherine Dunn] — Generation Loss, Available Dark, Hard Light, and the forthcoming The Book of Lamps and Banners— have been compared to those of Patricia Highsmith and have been optioned for a TV series. She is a longtime reviewer, critic and essayist for the Washington Post and Los Angeles Times, among many others, and for twenty years has written a book review column for the Magazine of Fantasy and Science Fiction. Much of her fiction focuses on artists, particularly those outside the mainstream, as well as on the world-altering effects of climate change. Her novel, Curious Toys, inspired by the artist Henry Darger and a true crime in 1915 Chicago, will be published in 2019 by Mullholland Books/Little, Brown. She is on the faculty of the Stonecoast MFA Program in Creative Writing, and divides her time between the coast of Maine and North London. You can find her on Twitter @liz_hand and on Facebook @ElizabethHandAuthor.

Rebecca F. Kuang is a Marshall Scholar, Chinese-English translator, and the Astounding Award-winning and the Hugo, Nebula, Locus, and World Fantasy Award nominated author of the Poppy War trilogy and the forthcoming Babel. Her work has won the Crawford Award and the Compton Crook Award for Best First Novel. She has an MPhil in Chinese Studies from Cambridge and an MSc in Contemporary Chinese Studies from Oxford; she is now pursuing a PhD in East Asian Languages and Literatures at Yale, where she studies diaspora, contemporary Chinese literature, and Asian American literature.

Kate Alice Marshall writes horror and thrillers for all ages, from middle grade to adult. Her YA debut I Am Still Alive, nominated for the Washington State Book Award, was hailed as a "tense wire of a novel" by the New York Times and optioned for film by Universal, while her supernatural young adult thriller Rules for Vanishing was nominated for the Bram Stoker Award and has a TV adaptation in development. Her Eden Eld series, beginning with Thirteens, brings magic and scares to the middle grade audience, and her debut adult thriller is forthcoming in 2023.

Kate has been a dedicated writer since childhood, and attended the Odyssey Writing Workshop in 2005, which was instrumental in developing her craft and shaping her writing career. Since then, she's written video game dialog, retail copy, RPGs, and books in entirely too many genres. She now lives in the Pacific Northwest with her family, her dogs Octavia and Vonnegut, and an increasingly unruly garden. You can find more about her books at katemarshallbooks.com.

Arley Sorg is co-Editor-in-Chief at Fantasy Magazine and a 2022 recipient of SFWA's Kate Wilhelm Solstice Award. He is also a 2021 World Fantasy Award Finalist, a 2022 Locus Award Finalist, and a finalist for two 2022 Ignyte Awards: for his work as a critic as well as for his creative nonfiction. Arley is senior editor at Locus Magazine, associate editor at both Lightspeed & Nightmare, and a columnist for The Magazine of Fantasy and Science Fiction. He takes on multiple roles, including slush reader, movie reviewer, and book reviewer, and conducts interviews for multiple venues, including Clarkesworld Magazine and his own site: arleysorg.com. He has taught classes and run workshops for Clarion West, Augur Magazine, and more, is scheduled to be a guest at both Cascade Writers and the Odyssey Writing Workshop, and has been a guest speaker at a range of events. Arley grew up in England, Hawaii, and Colorado, and studied Asian Religions at Pitzer College. He lives in the SF Bay Area and writes in local coffee shops when he can. Find him on Twitter @arleysorg. Arley is a 2014 Odyssey Writing Workshop graduate. 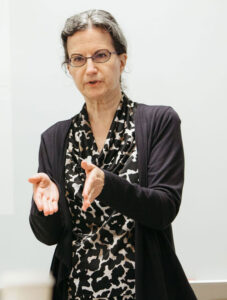 The creation of the Odyssey Writing Workshops Charitable Trust, a 501(c)(3) nonprofit organization devoted to helping developing writers of fantastic fiction improve their work, has been a dream of Jeanne’s which she has worked to make a reality.

Jeanne is a writer, editor, scientist, and teacher. She began her professional life as an astrophysicist and mathematician, teaching astronomy at Michigan State University and Cornell University, and working in the Astronaut Training Division at NASA’s Johnson Space Center.

But soon her love of science fiction led her to earn her MFA in creative writing. She moved into a career in publishing, becoming a senior editor at Bantam Doubleday Dell, where she created and launched the Abyss imprint of innovative horror and the Cutting Edge imprint of noir literary fiction. She also ran the science fiction/fantasy publishing program. In addition, she edited a wide range of fiction and nonfiction. She worked with such authors as William F. Nolan, Joan Vinge, Robert Anton Wilson, Dennis Etchison, Tanith Lee, Kathe Koja, Poppy Z. Brite, J. M. Dillard, David Wingrove, Barry Gifford, Patrick McCabe, and Peter Dickinson. In her eight years in New York publishing, she edited numerous award-winning and best-selling authors and gained a reputation for discovering and nurturing new writers. Jeanne won the World Fantasy Award for her editing.

Jeanne left New York to find a balance that would allow her to do her own writing and work in a more in-depth way with writers.

Jeanne has had seven books published by major publishers. Her last novel to hit the stores was Invoking Darkness, the third volume in her best-selling trilogy The Passing of the Techno-Mages (Del Rey), set in the Babylon 5 universe. The Sci-Fi Channel called the trilogy “A revelation for Babylon 5 fans. . . . Not ‘television episodic’ in look and feel. They are truly novels in their own right.” Her book The Science of Star Wars (St. Martin’s) was chosen by the New York Public Library for its recommended reading list. The Science of The X-Files (Berkley) was nominated for the Bram Stoker Award. Jeanne is currently writing a near-future science thriller about genetic manipulation, titled Fatal Spiral.

Jeanne has published short fiction and nonfiction in many magazines and anthologies. She has also ghostwritten several bestselling books.

The Many Faces of Van Helsing (Berkley), an anthology edited by Jeanne, was nominated for the Bram Stoker Award. The editors at Barnes and Noble called it “brilliant. . . . Arguably the strongest collection of supernatural stories to be released in years.”

Since she loves working with developing writers, Jeanne created and serves as primary instructor at Your Personal Odyssey Writing Workshop, an innovative program that combines advanced lectures, expert feedback, and deep mentoring, and provides a personalized, one-on-one online experience responsive to each writer’s needs. In 2010, Jeanne launched Odyssey Online Classes to help writers all over the world improve their skills in specific, targeted areas. Jeanne oversees the courses offered and teaches every few years. In 2015, Jeanne was nominated for a World Fantasy Award for her work as Odyssey director and instructor.

She is also an English lecturer at Saint Anselm College in Manchester, New Hampshire, where she teaches fiction writing.

Jeanne has spoken widely on writing, publishing, science, and science fiction at venues as varied as the Smithsonian Institute, the Air Force Revolutionary Technologies Division, the Intel International Science Fair, the American Chemical Society, Dartmouth College, the Discovery Channel, the History Channel, the Science Channel, Turner Entertainment, the Art Bell radio program, and many radio shows, bookstores, and conventions. More information is on her site, www.jeannecavelos.com.