No fiction can have real interest if the central character is not an agent struggling for his or her own goals but a victim, subject to the will of others.

Characters create the strong emotional connection between the story and the reader. Except when they don’t. Many characters don’t really come to life for the reader. They don’t seem alive and unique and real. They don’t move the story ahead through a dynamic process of struggle and change. 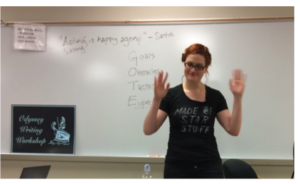 In this webinar, bestselling author Meagan Spooner combines her writing and acting knowledge to teach you how to step into the skin of your character, to understand his physicality and key aspects of his mentality. Becoming aware of the character’s situation and self help you to create a deep, rich, believable character and present him to the reader in a compelling way.

Meg discusses the most important aspects of your character to understand and chart through the story to create a strong character arc. A character may have multiple goals that have different strengths and priorities at different times. A character’s motivations and emotions may change. The expectations a character has and the tactics that character uses may change. Examining these elements for each beat in a scene can help you create strong progressions. Showing these changes to the reader is another challenge, requiring a strong character voice and manipulation of style. If the changes are shown in a vivid and believable way, the reader can be swept up in the character’s struggle and transformation.

Meg also explains how to deal with common problems, such as using the same descriptions, actions, and phrasings for multiple characters; making your characters too much alike; getting stuck with a character; and having a character whose level of caring is not tied to the plot.

Finally, Meg discusses the importance of giving your characters flaws that really matter to the story and creating believable antagonists.

This webinar, recorded at the 2016 Odyssey Writing Workshop, allows writers the opportunity to sit in on an Odyssey lecture in its entirety for the very first time.

The webinar is intended for writers of fantastic fiction, which is an umbrella term covering fantasy, science fiction, horror, magical realism, and anything in between. Yet creating compelling characters is important for all fiction writers, so those who focus on other genres could profit from this webinar and would be welcome.

While the webinar will be useful to writers at all levels, it will probably be most useful to those who have already spent significant hours writing and struggling to create characters and character arcs. Those writers should have a better sense of their particular challenges and which of the strategies discussed will be most helpful.

Webinar Preview: You can listen to an audio-only preview of Meg’s lecture here.

Note that this is not an application process as with Odyssey’s online courses but a simple registration, and you will be asked to submit payment when you register.

Once you register, you will receive via email a handout associated with the lecture and access to the video recording. It is recommended that you read the handout before viewing the lecture.

You will have access to the recording for 60 days.

Webinar content, in any format, is for the individual student only. Such content includes handouts, readings, files, and the recording of the webinar. Webinar content may not be posted, copied, shared, or distributed. The copyright of the content belongs variously to the instructor, to the authors of the readings, to Jeanne Cavelos, or to the Odyssey Writing Workshops.

Meagan Spooner is the New York Times bestselling author of the Skylark trilogy (Skylark, Shadowlark, and Lark Ascending) and the Starbound trilogy (These Broken Stars, This Shattered World, and Their Fractured Light). She attended Odyssey in 2009 and sold her first novel a year and a half later.

She returned to Odyssey in 2016 as the Jeffrey A. Pert Memorial Lecturer and delivered this talk on Creating Characters and Character Arcs, workshopped student manuscripts, and met individually with students.

She grew up in Virginia, reading and writing every spare moment of the day, while dreaming about life as an archaeologist, a marine biologist, an astronaut. She’s traveled all over the world to places like Egypt, Australia, South Africa, Antarctica, and the Galapagos, and there’s a bit of every trip in every story she writes.

She currently lives and writes in Asheville, North Carolina, but the siren call of travel is hard to resist, and there’s no telling how long she’ll stay there.

In her spare time she plays guitar, plays video games, plays with her cat, and reads.